More Cash in Circulation is Good for the Economy 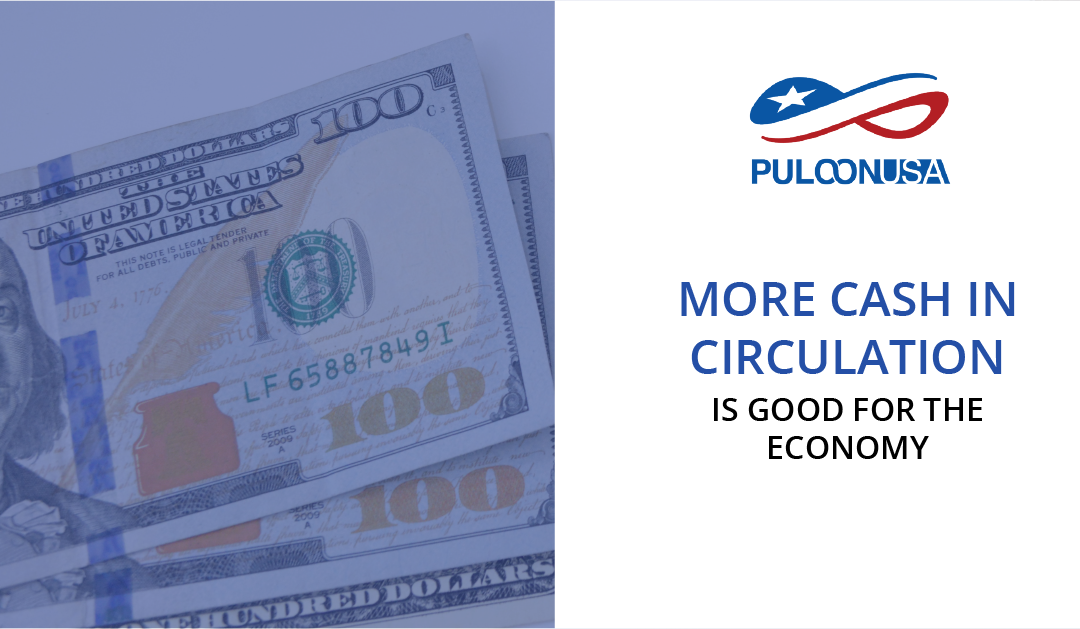 According to the Board of Governors of the Federal Reserve System, as of February 10, 2021, there are $2.05 trillion worth of Federal Reserve notes in circulation. That is a significant increase from the end of 2019, when the amount of notes in circulation was shy of $1.8 trillion. NBC News reported that the increase in circulation from December 31, 2019 to December 31, 2020 was “the biggest one-year percentage increase since 1945, as the nation was coming out of the war and the military-industrial complex took hold.”

Historically, this kind of increase has been good for the economy.

Boost from the Stimulus Package

The pandemic relief stimulus package passed by Congress in May 2020 as well as the Federal Reserve’s digital money printing program significantly helped increase the amount of cash in the Central bank and in circulation. Additionally, foreign central banks were part of an extended currency exchange program as demand for the dollar increased.

This cash influx into the economy can be a good thing according to experts. NBC News quoted DataTrek Research co-founder Nick Colas as stating, “Annual growth of US cash in circulation always peaks at the start of economic cycles.”

Colas went on to say, “While this may be a quirky indicator, it has a solid history of marking economic turning points. In all the buzz about how the pandemic economy favors virtual money over physical cash, it is worth noting that demand for the latter is at Y2K levels and higher than any other recession. This gives a fresh perspective to the idea of ‘cash on the sidelines,’ and one that should foretell improved US consumer spending in the months to come.”

Cash Increase before an Economic Boom

In times when cash in circulation increases, as all of that cash builds up, it needs to find a place to go. Historically, this has led to an economic boom. The same phenomenon happened in 1983 and 1991 as the US headed out of a recession, in 2002 at the end of the dot-com bust, and in 2009 after the Great Recession.

Given the historical shift in economic health when this kind of cash is in circulation, one can hope to see an increase in consumer spending in 2021.